By the end of my ‘interview’ (read: a few pints) with Yeastie Boy Stu McKinlay, I was explaining (in graphic detail) the unique way in which my two-year-old son has taken to urinating.  Stu rightly pointed out that that was quite an intimate family detail to share; but after yakking for two hours with New Zealand’s favourite brewer-without-a-brewery, sharing such details was simply par for the course.  He’s just the kind of bloke that you feel immediately at-ease with.

We caught-up at Goldings Free Dive – a recent (in relative terms) addition to Wellington’s bustling craft beer scene, and one that I hadn’t had a chance to visit before leaving the capital at the end of last year.  It’s a perfect spot for an after-work catch-up (where in Wellington isn’t?) – although its school-night popularity made it a piss-poor location for recording our conversation, with background noise increasing linearly as late-Arvo turned to early-Evo.

(The recording was intended to only be an aid to my viciously short memory – allowing me to relax rather than having to furiously scribble notes.  Stu has kindly allowed me to share some of the audio here…but I apologise in advance for the lacklustre quality.)

I met Stu on his way home from his ‘day job’ as an analyst at Z Energy – a timely reminder that the creator of multi-award-winning drops like Gunnamatta (and hate-mail-inspiring ones like Rex Attitude) is, at best, a part-time brewer.  To my mind, that’s a bit like Ricky Gervais having to return to a place like Wernham Hogg after writing The Office; but for Stu, the retention of his analyst alter-ego is an absolutely conscious decision.

He says that he and Sam Possenniskie – the Yeastie Boys entire – have purposely been growing their business at a rate that suits them and no-one else.  In order to do that, they’ve ploughed more-or-less every cent they’ve made from YB back into developing the company, all while maintaining absolute control over its direction.  Stu says they’ve basically done everything you’re not supposed to do when starting a business: they’ve always been under-capitalised, and have never been able to give as much of their time to the company as it might need to develop swiftly.  But given their unquestionable success, perhaps it’s the rule books that need to change – since the biggest complaint anyone can make about YB (Rex haters aside) is that there’s never enough of their product.  And that’s a pretty strong position for any company to be in.

It’s hard not to talk about YB when you’re with Stu – I’m pretty sure there are Beer Geeks who would have stepped over my dead body for a chance to talk about their favourite company with its creative director.  But we weren’t at Goldings to discuss YB’s future direction; that’s what business journalists or proper beer writers like Jono Galuszka are for.  I also wasn’t there to just talk about how YB began and what’s happened since; if you want a comprehensive history of that chestnut, check out the relevant podisode of the Beer Diary Podcast.

The stuff that I was really interested in was how Stu the Brewer evolved – since in the beginning, there was nothing; then, there was Pot Kettle Black.  Being at the Alpha of my own brewing journey, I wanted to know what happened in between.

Here’s Stu talking about the evolution of his art, up to the inception of PKB.  Try to ignore the f**king moron who repeatedly says “Yeah, yeah, yeah” and “Right, right” – I have no idea who that knobhead was:

In terms of the evolution from backyard brewing to Yeastie Boys, Stu tips his cap to an important flashpoint: namely, the insistence by contract brewing partner Steve Nally (from Invercargill Brewery) that Stu and Sam had to produce 1200 litres of PKB (rather than the initially-requested 600 litres), or he just wouldn’t brew it full-stop.  Steve’s (omniscient) rationale was that PKB was just that f**king good, and thus refused to allow the boys to only dip their toes in the commercial brewing ocean.

Steve’s ultimatum some five-odd years ago was the start of a topsy-turvy ride – filled with awards and notoriety, as well as batch-dumping and resulting droughts.  But the ride has undoubtedly been ever-upwards, to the point where as I type they’re somewhere in England brewing 50,000 litres of Gunnamatta for local consumption.  Not bad for a bloke who put down his first all-grain brew less than a decade ago.

Stu’s brewing has evolved to the point where the kit that was used to create PKB has sat idle for the past 18 months.  Nowadays, whenever he wants to put down something new he just blocks-off some brewery time at one of his contract brewing sites (the aforementioned Invercargill, or Four Avenues in Christchurch) and makes 20 kegs of it.  Unsurprisingly, Stu and Sam don’t have any trouble finding retailers who are prepared to ‘gamble’ on a keg or two of a new YB brew.  I mentioned to Stu that this approach is kind of like beta-testing on a big scale – to which Stu replied that he’d never thought of it that way before.  I think he was probably being polite.

Our conversation floated around from topic to topic – from the importance of proclamations (starting with “I’m going to be a beer judge” – a proclamation he shudders when recalling – up to his latest “We’re going to open a Yeastie Boys venue”), to our shared belief in the importance of positivity (“What the fuck does ‘meh’ mean?”).  We peppered our conversation with a few tasty pints – Golden Eagle Bitter End from the hand-pull was unctuously malty, and Liberty Brewing Yakima Monster was, well, Yakima Monster (and thus friggin’ num-num). 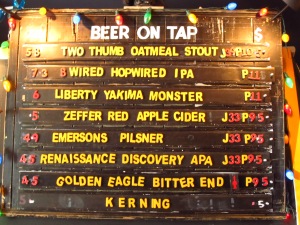 A last few sips, and our long chat was over.  I’d only asked one question (about the evolution of his brewing kit); the answer and resulting tangents had filled two hours.  But as the cliché goes, time really does fly when you’re having fun.

Stu’s dream is to one day own a combined brewery slash art studio – a space where he can pursue his passion, while his wife Fritha pursues hers.  The McKinlay family would live right upstairs, and Stu’s beer would only be available onsite – discussions of bottling and packaging make his eyes both roll and glaze-over simultaneously.  Stu openly admits that he may never reach his utopia; but considering the mountains he’s moved since popping down his first all-grain brew, I wouldn’t bet against him reaching an approximation.