Kamo Intermediate School, 1994.  I’m standing in Mr Nisbet’s metalwork class, trying desperately to bend-and-shape the lid of a tool box that we’ve been assembling all term.  It’s not going well – nary a straight line to be found in my handiwork – and Mr Nisbet’s soft and compassionate patience is starting to wear thin.

The most distressing thing about Mr Nisbet’s metalwork class was that – unlike math and science – I was actually trying really hard to be good at it.  I was used to being rubbish when I hadn’t applied myself – that just seemed like a case of Fair’s Fair – but to be rubbish in spite of approaching the task with ferocious enthusiasm?  That’s just plain-old depressing.

Needless to say, when it came to performing anything remotely resembling metalwork for my home brew setup, I knew that I needed to call in the Cavalry.

As luck would have it, I have a best mate named Andy – and anyone named Andy is almost invariably useful.  (Andy’s nickname is ‘Sooty’ – which, upon reflection, I realise now was probably a racist cap-tip to his Cook Island heritage; and although I didn’t coin the nickname, I am one of the few who still uses it regularly.  I claim both youthful ignorance and old-man nostalgia in my defence.) 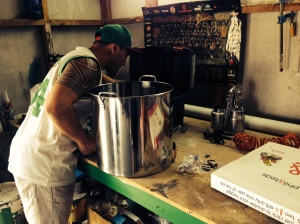 Andy and I go way-back: we played 1st XV footy together (a period in which I earned the nickname Droppa, for my inability to catch the ball at essential moments – at least Andy’s nickname was just race-based); we stocked shelves at Woolworth’s in the middle of the night together; and we more-or-less had our first kids together (y’know, timing-wise).

These days, Andy leads a team that builds enormous parts for multi-million dollar superyachts – so if anything, he was a weeny bit over-qualified for the task at hand: namely, drilling a hole.  Or, more specifically, drilling a hole in one of my stock pots so that it could finish its transformation into a mash tun. 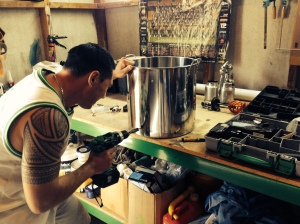 I won’t lie: despite Andy’s impressive credentials (the phrase sledgehammer to crack a nut springs to mind), I was still a little apprehensive as he pressed the drill to the side of the kettle wall; one wrong move, and a perfectly-good stock pot would be turned into nothing more than a stainless steel plantar box.  And a fairly useless one, at that. 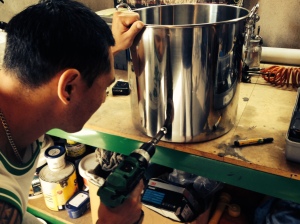 Of course, I needn’t have been concerned; Andy glided through the mash tun wall with ease – the wafer-thin stainless steel no match for a tungsten-tipped drill bit built to conquer far tougher stuff.  A few minutes after the job began, it was over again; and the result was a perfectly-formed and gorgeously-rounded hole to call my own. An O-ring here and a valve over there, and the job was done – a fully-functioning mash tun, complete with false bottom. 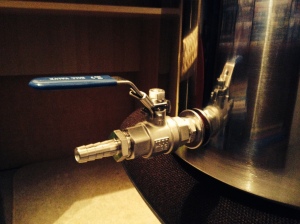 All those sleepless nights (I kid you not) spent fussing over the What Might Go Wrongs were mercifully wasted – and I’d even squeezed-in some quality time with one of my best buddies on the planet.

Thanks, Sooty.  Mr Nisbet would have approved.